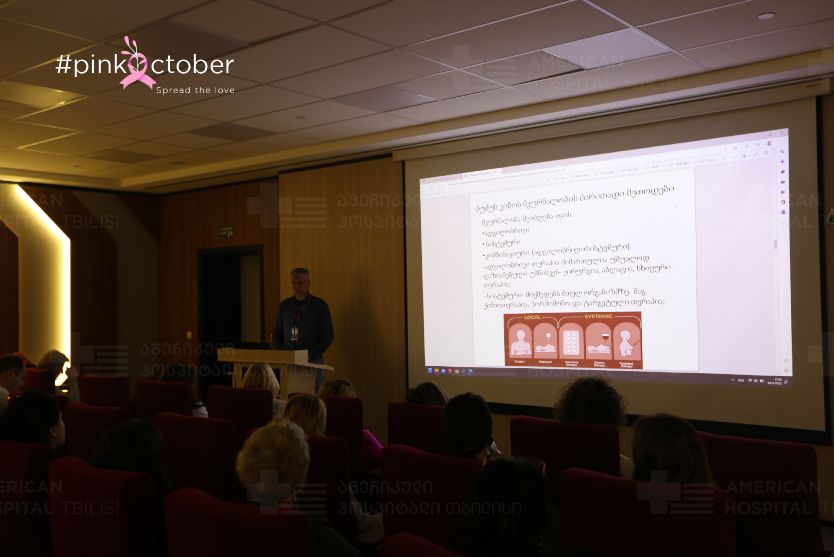 The conference’s purpose was to raise the awareness of the employees of “American Hospital Tbilisi”, which was successfully implemented within the framework of corporate and social responsibility, as well as care for each colleague.

Oncologists who support the fight against breast cancer, admire survivors, and are proud of their results, never lose hope! Over time, in the wake of the development of medicine, the methods of treatment against cancer, in particular, breast cancer, are improved and developed, but despite this, the statistical data are not so favorable.

Irakli Papasqua, mammologist, and doctor of medicine, started his presentation with statistical data:

“Breast cancer is in the first place in the structure of women’s oncological diseases. The cases of rejuvenation of the disease are constantly increasing because it is more often found in women under the age of 40. In the case of 90% of the disease, it is diagnosed after 40 years, at most, at the age of 40-60 years. Also, breast cancer in men often happens, but men sometimes do not even know that such a disease exists. Because of this, diagnosis and treatment are done at a later stage, and therefore, the therapeutic effect is also weak. As for the statistics of Georgia, according to the data of 2020, 1,600 cases of breast cancer were detected. In more detail, every eighth woman is under the risk factor of breast cancer several times during her life”, said Irakli Pasqua.

As for preventive measures, according to Irakli Papasqua, prevention of breast cancer is a screening study. According to him, the screening study of asymptomatic persons The primary screening system of the group is to identify the disease, that is, it is a study of a healthy population.

“The screening study is conducted in women aged 40-70 years. Because breast cancer is rejuvenating, preferably from the age of 30, regularly, once or twice a year, you should do an ultrasound examination. We should pay attention to such background diseases as mastopathy and cystic changes. Any woman should consult a mammologist after the age of 30, at least once a year. As for the screening program, there is a free screening program in Georgia, within the framework of which, once in two years. Women aged 40-70 can undergo a free mammographic examination. This program includes ultrasound examination and consultation of a mammologist, we can also do biopsy and cytological examinations”, Irakli Papasqua said.

If the patient is diagnosed with breast cancer as a result of the screening research, long-term and quite effective treatment begins. The patient may also need surgical intervention, although today, surgical treatment methods are also quite sophisticated. According to one surgeon, mammologist, and doctor of medicine Mikheil Janjalia, Both surgical treatment, radiation therapy, and systemic treatment are important in the treatment of breast cancer. Their sequence depends on the spread of the disease, the stage, and the biological type of breast cancer. “During the surgical treatment, we are focused on not worsening the patient’s quality of life. Those operations that were carried out earlier, were large-scale and caused disability, today no longer exist, that is, we no longer use them. The starting point is to maintain as much as possible the quality of life of the patient we are treating and not to change in any way the idea that he is disabled. Let’s not make him truly disabled, which can happen during large-scale operations, and not cut him off from the general society. Additionally, there are different types of techniques that we usually consider when dealing with breast cancer. First, we fight the nodule in the breast, when the surgery is done, in the case of locally advanced breast cancer, we fight the metastases in the lymph nodes, but before,
During the surgical operations, we had to remove the metastases in the lymph nodes as much as possible – we had to perform the maximum lymph dissection.

We are talking about the axillary lymph nodes, i.e. the axillary and subclavian nodes, when, in most cases, a person lost the function of a hand limb, and as a result, their lifestyle changes. Imagine an artist, a pianist, that is, a person who uses his hands professionally, if you like, a tailor. When large-scale operations were performed on such people they became disabled and lost the profession they loved,” explained Mikheil Janjalia. According to him, with today’s techniques, a partial lymph dissection is performed, during which a small part of the lymph nodes is easily removed and they begin to study them. The essence of the technique lies in the fact that through various methods, doctors find the primary lymph nodes. If the disease is spread locally, i.e. the metastatic process has started in the local lymph nodes, first of all, the first-order lymph nodes are affected.

Natia Jokhadze, head of the clinical oncology department, spoke about the third method of breast cancer treatment, i.e. systemic therapy. According to him, systemic therapy is a different method of treatment and it is called systemic because it affects absolutely all cells of the body.

“Systemic therapy includes several treatment methods: chemotherapy, hormone therapy, and targeted therapy, otherwise, targeted therapy. In itself, this is the latest immunotherapy, in essence, these treatments are very different from each other. Chemotherapy has no target and is not considered a “smart” treatment. It kills all the cells whose rate and rate of reproduction are high. Targeted therapy has its target – the proteins on the surface of the cell that will attract these drugs, it is by the drug that the cancer cells are damaged, and therefore, the systemic side effects of the drugs are much less in this case.

At the end of the presentation, Natia Jokhadze once again urged the employees and patients to apply to the screening centers on time to be examined in time, and if necessary, to detect the disease in time at the stage when it is curable and manageable.